A bridge over troubled water

Most microbes in aquatic system are not free-floating, but rather found within biofilms associated with particular surfaces. Biofilms growing on decomposing organic matter such as dead plants are called epinecrotic, while those growing on inorganic surfaces such as rocks are called epilithic. In a new paper in Microorganisms Jennifer Lang et al. compare the development of biofilms growing under water on both types of surfaces. To study the development of submerged epilithic biofilms, unglazed ceramic tiles were used. For the epinecrotic biofilms they used - wait for it - pig carcasses. Biofilm development was followed by placing the tiles and dead pigs in two different streams in Ohio and Pennsylvania, and by taking different samples over time.

The epinecrotic and epilithic microbial communities were clearly different from each other, and changed over time following specific succession steps. Geographical location was also a determining factor.

This study is interesting for forensic applications, because pig skin is very similar to human skin, and the decomposition and microbial composition of pig carcasses over time is likely to follow a similar path to that of human bodies. The pig carcass biofilms showed distinctive shifts in the first and second weeks, and this information could be used by a forensic team to estimate the time that a body might have spent in the water. A fascinating application of microbial biofilm research! 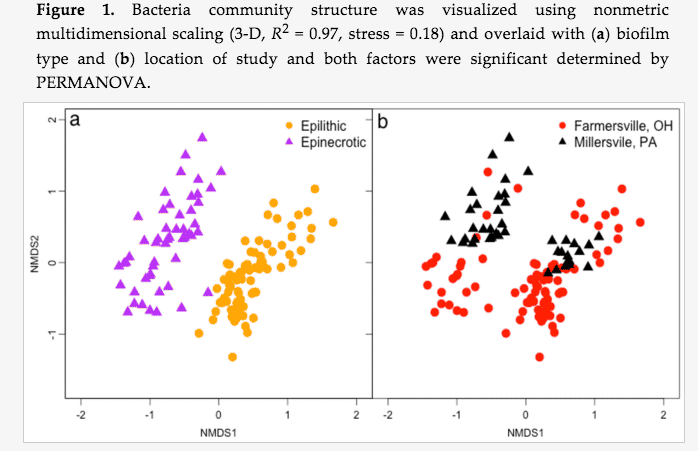 Here is the citation and abstract of the paper (Open Access):

Biofilms are a ubiquitous formation of microbial communities found on surfaces in aqueous environments. These structures have been investigated as biomonitoring indicators for stream heath, and here were used for the potential use in forensic sciences. Biofilm successional development has been proposed as a method to determine the postmortem submersion interval (PMSI) of remains because there are no standard methods for estimating the PMSI and biofilms are ubiquitous in aquatic habitats. We sought to compare the development of epinecrotic (biofilms on Sus scrofa domesticus carcasses) and epilithic (biofilms on unglazed ceramic tiles) communities in two small streams using bacterial automated ribosomal intergenic spacer analysis. Epinecrotic communities were significantly different from epilithic communities even though environmental factors associated with each stream location also had a significant influence on biofilm structure. All communities at both locations exhibited significant succession suggesting that changing communities throughout time is a general characteristic of stream biofilm communities. The implications resulting from this work are that epinecrotic communities have distinctive shifts at the first and second weeks, and therefore the potential to be used in forensic applications by associating successional changes with submersion time to estimate a PMSI. The influence of environmental factors, however, indicates the lack of a successional pattern with the same organisms and a focus on functional diversity may be more applicable in a forensic context.