Stanford investigators discover that bacteriophages are critical in biofilm formation by Pseudomonas, which causes hospital-acquired infections, and pneumonia, and severe complications in cystic fibrosis.

Biofilms—communities of bacteria encased in a polymer-rich matrix—confer bacteria with the ability to persist in pathologic host contexts, such as the cystic fibrosis (CF) airways. How bacteria assemble polymers into biofilms is largely unknown. We find that the extracellular matrix produced by Pseudomonas aeruginosa self-assembles into a liquid crystal through entropic interactions between polymers and filamentous Pf bacteriophages, which are long, negatively charged filaments. This liquid crystalline structure enhances biofilm function by increasing adhesion and tolerance to desiccation and antibiotics. Pf bacteriophages are prevalent among P. aeruginosa clinical isolates and were detected in CF sputum. The addition of Pf bacteriophage to sputum polymers or serum was sufficient to drive their rapid assembly into viscous liquid crystals. Fd, a related bacteriophage of Escherichia coli, has similar biofilm-building capabilities. Targeting filamentous bacteriophage or the liquid crystalline organization of the biofilm matrix may represent antibacterial strategies. 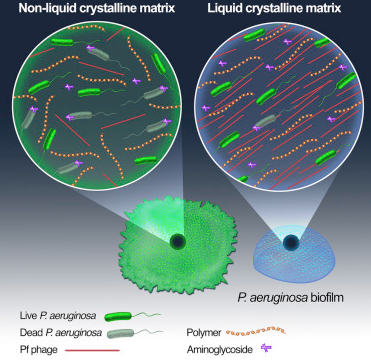 “The long, filamentous phages made by the bacteria interact with these polymers to form orderly structures that help biofilms stick to surfaces and resist removal,” Bollyky said. “I always assumed that biofilms were chaotic networks of polymers and bacteria that look like the hairball plug you pull from the bottom of your shower drain. We were surprised to see that actually, in the presence of these phages, biofilm architecture is more like a crystal than a hairball. That higher-order organization makes these biofilms much more tenacious and formidable.” 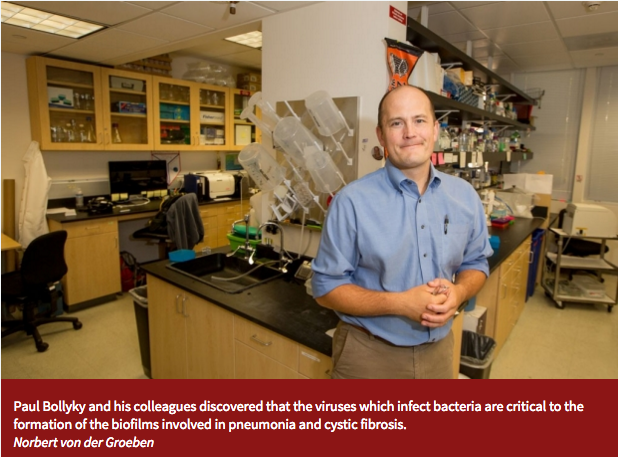