Three recent scientific papers and one news article on biofilms. 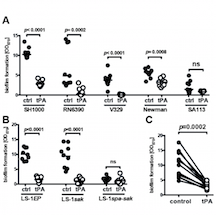 Staphylococcus aureus (S. aureus) biofilm infections of indwelling medical devices are a major medical challenge due to their high prevalence and antibiotic resistance. As fibrin plays an important role in S. aureus biofilm formation, we hypothesize that coating with fibrinolytic agents on the surface of implants can be used as a new anti-biofilm prophylaxis.(...) tPA coating efficiently inhibited biofilm formation by various S. aureus strains. The effect was dependent on plasminogen activation by tPA, leading to subsequent local fibrin cleavage. tPA coating on implant surfaces prevented both the early adhesion and the later biomass accumulation. Furthermore, tPA coating increased susceptibility of biofilm infections to antibiotics. In vivo, significantly less bacteria were detected on the surface of implants coated with tPA compared to control implants from mice treated with cloxacillin. Conclusions: Fibrinolytic coatings (e.g. with tPA) reduce S. aureus biofilm formation both in vitro and in vivo, suggesting a novel concept to prevent bacterial biofilm infections on indwelling medical devices. 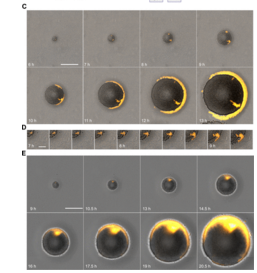 Bacterial biofilms can generate micro-heterogeneity in terms of surface structures. However, little is known about the associated changes in the physics of cell–cell interaction and its impact on the architecture of biofilms. In this study, we used the type IV pilus of Neisseria gonorrhoeae to test whether variation of surface structures induces cell-sorting. We show that the rupture forces between pili are fine-tuned by post-translational modification. Bacterial sorting was dependent on pilus post-translational modification and pilus density. Active force generation was necessary for defined morphologies of mixed microcolonies. The observed morphotypes were in remarkable agreement with the differential strength of adhesion hypothesis proposing that a tug-of-war among surface structures of different cells governs cell sorting. We conclude that in early biofilms the density and rupture force of bacterial surface structures can trigger cell sorting based on similar physical principles as in developing embryos.

The recovery of Pseudomonas aeruginosa from respiratory samples of COPD patients has been associated with impaired lung function and recurrent exacerbations, partly due to strain-dependent factors such as biofilm formation. Aims: To analyse the bronchial microbiome of COPD patients with positive cultures for P.aeruginosa associated with either colonization or infection, and differentiated according to biofilm production, both in stability and exacerbation. (...) Conclusions: In COPD patients colonized or infected by P. aeruginosa, biofilm production was associated with an overgrowth of some bacterial OTUs, which attained a relative abundance of up to 10%. Accordingly, a biofilm environment undermined a change in the bronchial microbiome identifiable through 16srRNA analyses. 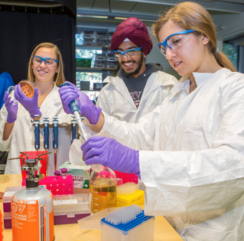 "Potentially lethal microbial biofilms are responsible for approximately 1.7 million hospital-acquired infections in the U.S. each year, according to the Centers for Disease Control and Prevention. But a growing area of research has shown that biofilms— bacterial communities stuck together with clumps of sugar and protein—could also have a number of beneficial uses, from powering an automobile to cleaning up a chemical spill. Students at the Harvard John A. Paulson School of Engineering and Applied Sciences (SEAS), are now getting hands-on experience in this burgeoning area of genetic engineering in the school’s new bioengineering laboratory. The lab, which opened in September, is the newest addition to the Active Learning Labs at SEAS, which provide hands-on engineering experience for students."

For more papers on microbial communities, check out my daily blog MicrobiomeDigest

Jen Thoroughgood
about 6 years ago
Great round-up - thanks Elisabeth!