We said we wanted new tools. Andrew Goodman and Justin Sonnenburg did not disappoint with their new work published in Cell.

Two papers published in the latest issue of Cell present exciting new genetic tools to study the microbiome. Both papers present methods that have long been used in molecular biology, especially in E. coli. However, transferring these tools from the comfortable and familiar E. coli monocultures has always been challenging. The researchers showed that they can make stable genetic reporter constructs in Bacteriodes, which is a very important member of the healthy microbiome.

Whitaker et al from the Sonnenburg group showed that they could differentiate between 6 different fluorescently tagged Bacteroides strains after 14 days colonising a mouse. The major challenges prior to this breakthrough were producing bacterial strains with a high enough fluorescence to be visible above the background of the gut while simultaneously not having a detectible fitness cost. The research team achieved this by using phage promoter as a base to test different promoter sequences to produce a broad range of fluorescence intensity values. They then performed several fitness experiments and found no significant difference from the isogenic mutants. 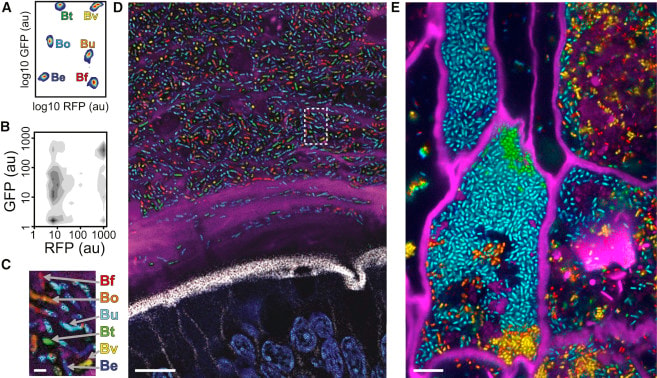 Lim et al from the Goodman lab took a different approach. They used the 16 rRNA gene promoter with a modified upstream region that binds the Tet repressor. This means that they can turn gene expression on or off using the non-toxic tetracycline analogue anhydrotetracycline (aTC). To demonstrate the power of this technique, the coupled their promoter system to the a sialidase which liberates sialic acid from the mucosa. They showed that they were able to induce the liberation of sialic acid using their promoter/repressor system which is an impressive demonstration of what can now be done.

At "Environmental Microbial Biofilms and Human Microbiomes: Drivers of Future Sustainability" in Singapore, many people were saying that we need more tools to study the microbiome. When I think of the breakthroughs we have made using these molecular tools in E. coli, I'm very excited to see how they will be applied to the microbiome.

Applying synthetic biology to engineer gut-resident microbes provides new avenues to investigate microbe-host interactions, perform diagnostics, and deliver therapeutics. Here, we describe a platform for engineering Bacteroides, the most abundant genus in the Western microbiota, which includes a process for high-throughput strain modification. We have identified a novel phage promoter and translational tuning strategy and achieved an unprecedented level of expression that enables imaging of fluorescent-protein-expressing Bacteroides stably colonizing the mouse gut. A detailed characterization of the phage promoter has provided a set of constitutive promoters that span over four logs of strength without detectable fitness burden within the gut over 14 days. These promoters function predictably over a 1,000,000-fold expression range in phylogenetically diverse Bacteroides species. With these promoters, unique fluorescent signatures were encoded to allow differentiation of six species within the gut. Fluorescent protein-based differentiation of isogenic strains revealed that priority of gut colonization determines colonic crypt occupancy.

The gut microbiota is implicated in numerous aspects of health and disease, but dissecting these connections is challenging because genetic tools for gut anaerobes are limited. Inducible promoters are particularly valuable tools because these platforms allow real-time analysis of the contribution of microbiome gene products to community assembly, host physiology, and disease. We developed a panel of tunable expression platforms for the prominent genus Bacteroides in which gene expression is controlled by a synthetic inducer. In the absence of inducer, promoter activity is fully repressed; addition of inducer rapidly increases gene expression by four to five orders of magnitude. Because the inducer is absent in mice and their diets, Bacteroides gene expression inside the gut can be modulated by providing the inducer in drinking water. We use this system to measure the dynamic relationship between commensal sialidase activity and liberation of mucosal sialic acid, a receptor and nutrient for pathogens.

Back to Research
Next

Why are biofilms important to us?