Tiny fractures in cement wells and pipes are hard to detect or repair, but can cause leaking of gas or oil into the environment.

The MSU Center for Biofilm Engineering team, led by Adrienne Phillips, employed ureolytic biofilm-forming bacteria, such as Sporosarcina pasteurii. In the presence of calcium, these bacteria hydrolyze urea and form crystals of calcium carbonate (calcite), that can clog small fractures in cement pipes and wells.

Phillips and her team successfully injected Sporosarcina pasteurii into a test well more than 1000 feet underground to repair microscopic fractures in the well casing.

In an industrial setting, leaking well casings can result in hydrocarbons, drilling fluids and other substances being released into adjacent rock strata and groundwater. Leaked gases, including methane, the main component of natural gas, can migrate to the surface and become airborne. Methane is a powerful greenhouse gas that contributes to climate change, so methods to contain it are increasingly sought after, Phillips said. "It's exciting to work on a problem that people care about," Phillips said. "We're addressing an environmental problem of international concern." 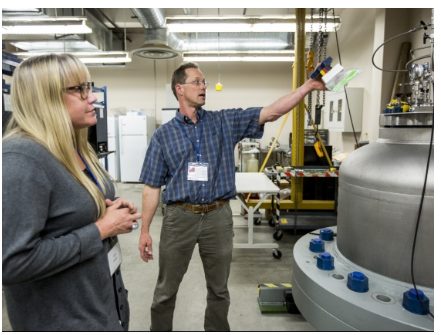 After receiving my PhD at Utrecht University in The Netherlands, I worked at the Dutch National Institute for Health and the St. Antonius Hospital in Nieuwegein. From 2001-2016 I worked in the laboratory of David Relman at Stanford University, where I have worked on the characterization of human oral, gastric, and intestinal microbiotas, and that of marine mammals. In 2016 I joined uBiome where we allow citizen scientists to sequence their microbiome. I also run Microbiome Digest, www.microbiomedigest.com, an almost daily compilation of scientific papers in the rapidly growing microbiome field, tweet on Twitter as @MicrobiomDigest, and scan published papers for image manipulation.
Follow
npj Biofilms and Microbiomes Community