All microbiologists owe a lot to Ferdinand Cohn. He was a methodical voice of reason in the complex world of microbial taxonomy. 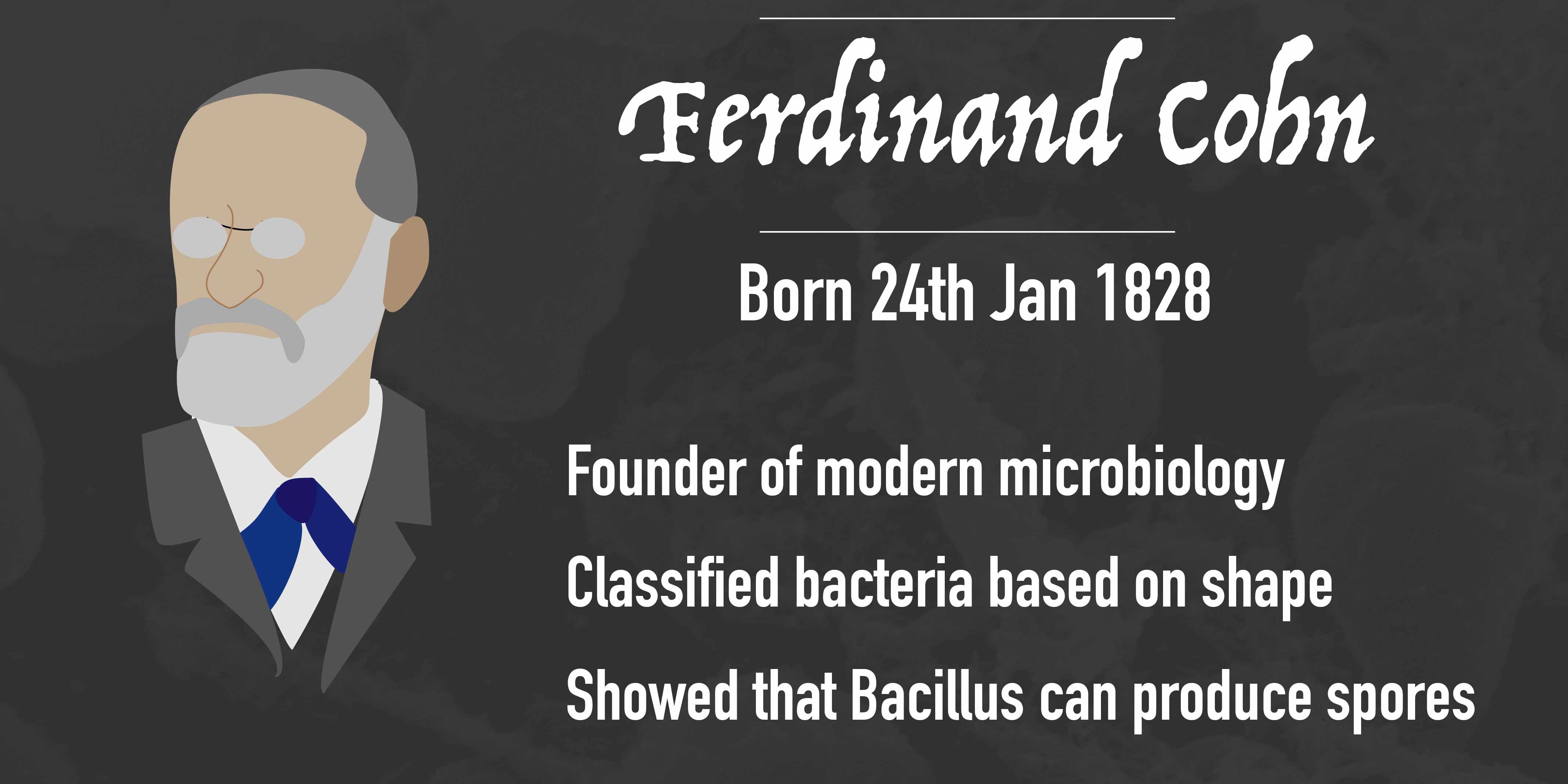 Tweet This: "#OnThisDay in 1828 Ferdinand Cohn was born. He revolutionised #microbiology"

You've heard of Robert Koch and Louis Pasteur, but how about Ferdinand Cohn?

Cohn was born in what is now Wroclaw in Poland on the 24th of January 1828. He went on to study botany in Berlin and got his degree at age 19.

What does botany have to do with microbiology? Well at the time, everything. Cohn was very methodical and spent years laboriously studying division in plant cells using very expensive but rudimentary microscopes. He became an expert at noticing details and this was to stand him in good stead. You see, there was a huge problem in the field of bacteriology and in the late 19th century a perfect storm was brewing to solve it, with Ferdinand Cohn at the centre.

At the time, culturing techniques were not very advanced. Think of a potato rotting at the back of a drawer in your kitchen. Are you picturing it? Well that was the extent of the culturing techniques back then and I'm only half joking. Scientists would grow bacterial cultures on cooked potato slices that were usually horribly contaminated. This lead to some troubling conclusions. People never doubted that bacteria existed but they believed that classification was impossible. They thought that bacteria arose spontaneously from decaying material and could be any possible shape. This isn't necessarily such a crazy conclusion if your potatoes are always contaminated but still, come on people!

Luckily, this was a golden age of microbiology and many scientists were working on improving the cultivation techniques. A guy named Julius Petri had the bright idea of putting solidified growth media into a glass dish covered with a lid to prevent contamination. Needless to say this invention caught on and crucially for Cohn, it meant the he could start to properly isolate pure bacterial cultures.

This allowed him to show that bacteria could indeed be classified, although it was much more difficult than plants as many of the bacterial features were "beyond resolution". If only he had a better microscope. Well, being the golden age of microbiology and being in Germany, he got a brand spanking new microscope with Carl Zeiss lenses. Not Zeiss the global corporation but Zeiss, the German guy who made a very nice microscopy glass (who later founded the company).

So with Petri on one side and Zeiss on the other, Cohn set to work classifying bacteria. With his eye for detail and expertise in botany, he was able to show that bacteria did not arise spontaneously from plants although it took him a while to convince his peers. He was also able to show that Bacillus cells formed spores that were resistant to heat. It was these experiments performed in collaboration with John Tyndall where Cohn really put the idea of spontaneous generation of microorganisms to bed.

So we owe Ferdinand Cohn a lot. From a considerable amount of chaos, he was able to bring the order and classification that we rely on today. Some people say that we owe him a lot more. A scientist named Robert Koch was know to visit Cohn on several occasions (golden age of microbiology) and was considered by some to be his student. However, claims that Cohn helped Koch to develop his postulates have never been substantiated. Despite being far less famous than Koch, Pasteur, Zeiss or even Petri, this quite man stood up in the face of stiff opposition and laid the ground for microbiology as we know it today.

For more information, read The roots of microbiology and the influence of Ferdinand Cohn on microbiology of the 19th century from FEMS Microbiology Reviews.

This week in Biofilms and Microbiomes: Monday November 7, 2016

Back to Science & Society
Next

Ben Libberton
npj Biofilms and Microbiomes Community
We use cookies to help improve your experience. By continuing to browse our website you are consenting to our use of cookies.
Learn more